During Computex 22, AMD showcased its updated CPU roadmap going through 2024, which yielded some exciting propositions to the desktop processor market. One of those products highlighted was a new 3D V-Cache SKU based on Zen 4 cores, and with the success of its previous Ryzen 7 5800X3D with 96 MB of 3D stacked V-Cache, gamers have been chomping at the bit for more ever since. Using their primetime keynote slot during CES 2023, AMD has unveiled its next 3D V Cache-based processors to the market using its Zen 4 core architecture.

Since AMD released its first desktop processor featuring its 3D V-Cache packaging technology, the Ryzen 7 5800X3D, it has given users and gamers a taste of the benefits that large pools of L3 cache can have on framerates in CPU-limited scenarios. Focusing on the previous Ryzen 7 5800X3D, AMD and TSMC added 64 MB SRAM chiplet onto the top of the existing 32 MB through a direct copper-to-copper bonding TSV to ensure circuit integrity. 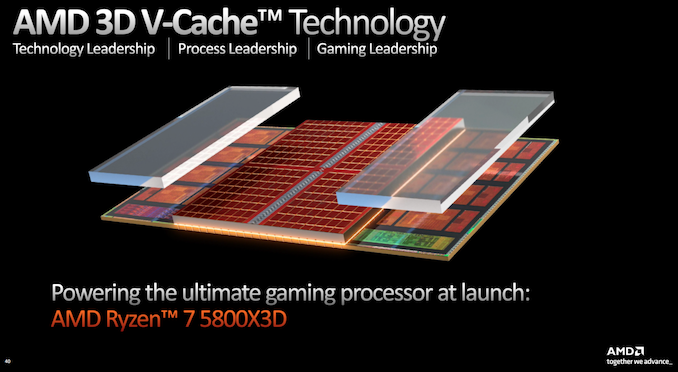 The method includes die thinning, intending to enable parity between the 3D stacked chiplet, the rest of the silicon, and the integrated heat spreader (IHS) so that it fits within the same overall platform frame, e.g., cooler and compatibility. As the Ryzen 7 5800X3D and its 96 MB of stacked L3 V-Cache displayed significant improvements in specific titles, the extra L3 cache didn’t provide that performance gain in other titles; there still isn’t an official list of games that benefit from extra L3 cache.

The main caveat with the Ryzen 7 5800X3D came through its compute performance. With slower overall core clock speeds than the Ryzen 7 5800X, it suffered in tasks such as rendering, encoding, and any task or workload that didn’t benefit from large amounts of L3 cache. It looks as though AMD considered that and did it better.

Below is a list of our detailed coverage of AMD’s Ryzen 7000 desktop processors and its 3D V-Cache packing technology:

AMD has gone all out with its 3D V-Cache packaging technology with the announcement of AMD Ryzen 9 7950X3D, a 16-core, 32-threaded behemoth with 128 MB of L3 cache, and a boost core clock speed of up to 5.7 GHz. While we saw some concessionary trade-offs between the previous generation Ryzen 7 5800X3D in computation performance, this was explained by lower voltages, necessitating a lower core base frequency and a lower core boost frequency. Consequently, pure CPU compute performance declined in contrast to the Ryzen 7 5800X.

The latest Ryzen 7000 X3D SKUs look to alleviate much of the previous discrepancies in performance like we saw with the Ryzen 7 5800X3D and 5800X, by allowing for similar peak turbo clock speeds without interfering with the integrity of the stacked silicon in the 3D V-Cache stack. 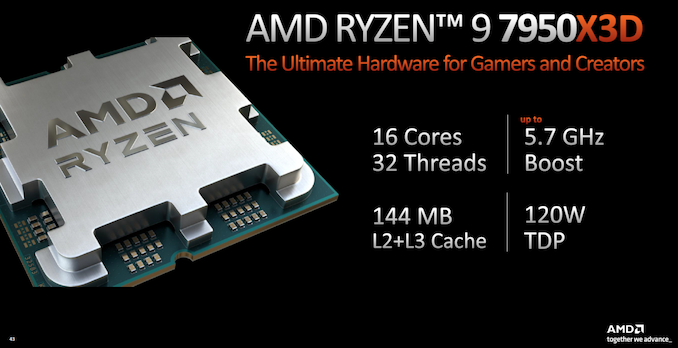 We have reached out to AMD to confirm how they managed to secure the integrity with a much greater boost clock speed than the previous Ryzen 7 5800X3D. Still, with the efficiency of TSMC’s 5 nm node and performance-per-watt upgrade with AMD’s Zen 4 core architecture over the 7 nm Zen 3 core, we believe this combination is one of the reasons how they managed it. We have also reached out to AMD on whether or not the Ryzen 7000 X3D processors are unlocked or if overclocking via the frequency multiplier is disabled. Once we receive a reply, we will update this piece with their response.

Opening with the flagship SKU, the Ryzen 9 7950X3D shares many of the same characteristics as the Ryzen 9 7900X, including 16-cores and 32-threads and a turbo frequency of up to 5.7 GHz. The enhanced chip offers 128MB of L3 cache, which is comprised of 64 MB of existing pooled L3 cache in the CCDs, and another 64 MB sliced on top with TSVs (presumably placing 64MB on one CCD, creating an unbalanced cache). Curiously, the official TDP is also much lower, with the chip rated at 120 W versus 170 W for the regular 7950X. Consequently, the 7950X3D has a lower base core frequency of 4.2 GHz, versus 4.5 GHz. Although the Ryzen 9 7950X3D has a 300 MHz slower base frequency, having the same turbo frequency of 5.7 GHz means that peak performance can be similar, though in heavily multithreaded situations the lower TDP is undoubtedly going to come into play.

AMD is competing at the top end of the x86 desktop market with its 16-core offerings, both in compute and gaming. Still, AMD has also readied a 12-core solution with their X3D chiplet packaging technology, the Ryzen 9 7900X3D. Sitting alongside the Ryzen 9 7900X in the stack, the Ryzen 9 7900X3D has double the L3 cache (128 vs. 64 MB) and the same 4.4 GHz boost core clock speed. The only differences come in the way of base frequencies and power consumption, with the Ryzen 9 7900X3D having the same 120 W TDP as all of the new Ryzen 7000 X3D-based SKUs, which as a consequence, does drop the base core frequencies down from 4.7 GHz to 4.4 GHz; a 300 MHz drop on base.

The final and third X3D SKU is the Ryzen 7 7800X3D processor, the direct successor, and replacement to the previous Ryzen 7 5800X3D. Sharing the same large 96 MB of L3 cache, AMD has improved the specifications with a faster boost core clock speed of up to 5 GHz, along with the residual benefits that AMD’s Zen 4 TSMC 5 nm core brings to the table in both performance, IPC uplift, and performance-per-watt efficiency. 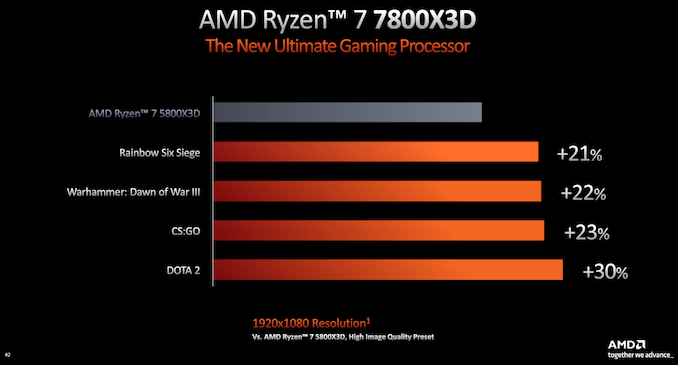 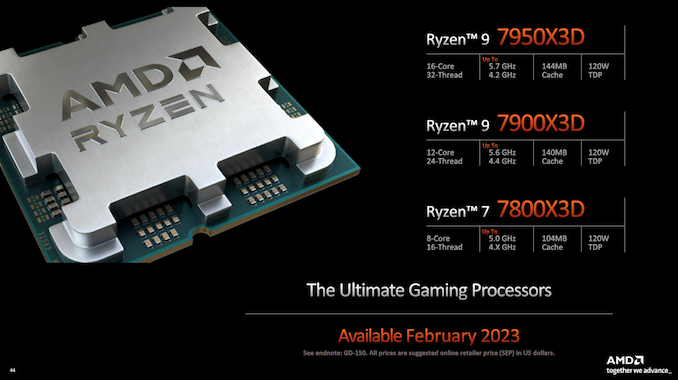 All three of AMD’s latest X3D-based 3D V-Cache packaged processors, including the Ryzen 9 7950X3D, the Ryzen 9 7900X3D, and the Ryzen 7 7800X3D, will be available in February 2023. Although it hasn’t provided information surrounding the expected MSRP of each CPU, the Ryzen 7 5800X3D came with a $100 premium over the regular Ryzen 7 5800X. We expect that there will be at least a similar price premium.

With price drops already in force for the non-X3D SKUs already on the market, such as the Ryzen 9 7900X, there could be room for the Ryzen 7000 X3D SKUs to slot in at the original MSRPs of each corresponding processor in the family.